Coláiste Dún Iascaigh’s debating team are Tipperary’s sole representative in this year’s Munster Debating Championship. This is the largest non-sporting competition in Munster. It is for senior cycle students with an interest in debating. There are five rounds of debate which are held by the Philosophical Society in UCC and across schools in Munster and a grand final which is always attended by a prominent Irish media personality. The competition has grown in numbers over the past number of years.

The format of the competition follows the format traditionally used by the Irish Times Debating Competition; Ireland’s most prestigious debating competition. Speakers compete initially in teams and can progress as teams or individuals. Speeches are five minutes in length for the opening rounds and seven minutes in the later rounds. Speeches are prepared in advance and the motions for debate cover many social, cultural, economic and political topics.

This year Coláiste Dún Iascaigh had two teams in the Semi-Finals. The first team of Dragos Marginean and Shauna O’ Dwyer debated the motion ‘This house believes that United States and NATO forces should withdraw from Afghanisatan.’ They came up against teams from Bandon Grammar School, Coláiste Spiorad Naomh, Laurel Hill and Christian Brothers, Cork. Despite an exceptional performance, they fell just short of qualifying.

In the other semi-final, teams from Middleton College, Christians, Scoil Mhuire, St. Brendan’s Killarney and Glenstal Abbey faced off against the Coláiste team of Paul Carbery and Emily Linehan on the topic of ‘This House Believes That Xi Jingping has done more harm than good for China.’

Impressing the judges from UCC with their excellent arguments and confident delivery, the Coláiste team emerged victorious. This was a very impressive performance by the team and sees them enter the final representing their school and their county.

The Coláiste have set high standards in recent years, with Emma Quirke having won the Munster and All-Ireland final in 2016. 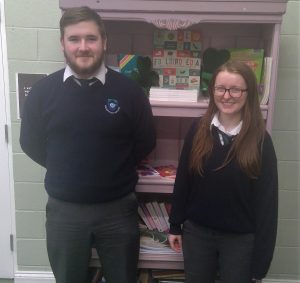