Coláiste Dún Iascaigh in Cahir was Shaking All Over last week as the school rocked to the music of The King. The Elvis Presley musical ‘All Shook Up’ played to packed houses and standing ovations for four performances.
The Coláiste’s annual show has become a beacon of super acting, glorious singing and magnificent dancing. 2019’s offering was no exception. From the team that brought us Thank You for The Music, Back to the 80’s and High School Musical, All Shook Up was a rollercoaster ride through the hits.
The basic premise of the story follows Chad, a wild man who has known ‘a lot of women’, as he brings his own sense of freedom to a sleepy American small-town.
As Chad, played by Jack Conway, is released from warden Adam Coffey’s prison, he embarks on adventure where love is found and lost and found again by the characters he encounters.
Jack Conway is outstanding as Chad. And boy can he sing! Jack rocks when he has to rock and plays it tender when the ballads need it. Jack has acted in previous school shows but he has never sung like this. His performance is one of many revelations.
Clara O’ Brien is known in the school as a great singer and this performance where she has to switch between Natalie and Ed would have challenged anybody with less talent. Clara does it all in her stride with an ease that belies her years. Clara was matched this year by Lucy McEniry who sang and acted with incredible passion and precision.
Every year there is one young performer that surprises the whole audience. This year it is young second year Ella Heeran. Again, Ella alters her performance from the very prim and proper museum guide to the passionate vixen who falls in love with ‘Ed’. Her performance was most memorable.
Niamh McKenna who played a mother last year reprises that trope this year with a polished and assured performance. Her beautiful rendition of ‘There’s Always Me’ was a true highlight as was Shanua O’ Dwyer’s ‘Heartbreak Hotel’ which left the audience gushing at the emotional depth that she brought to that classic.
Kevin O’ Connor once again brought his comedic talent to bear in his role as the frustrated Dennis. Kevin’s acting skills were emphasised in his great timing and his myriad facial expressions and gestures. Another ‘old hand’, Dragosh Marginean played Jim and captured his character skillfully.
Another set of newbies this year were Dean Keating, Cian O’ Mahoney and Alannah Boyle. Alannah played the stern killjoy Mayor Matilda with wonderful conviction.
While the actors take the applause, there are many others who do the unseen work. Norma Barry-Hurley is a true maestro and has been doing this so long that it would be acceptable for her to keep it simple. She never does. Each performance that she has directed over the last 21 years has seen her not only keep a consistency but has seen her reinvigorate so many performances on the Coláiste stage. Her production values are of the highest standards and she manages to get so many young stars to achieve higher than should be possible.
Judith Shortall gave up much of her maternity leave to bring her high standards to the acting this year. Her dedication is remarkable. Jessica Stokes is a new addition to the team and her choreography was precision itself, full of energy and timed beautifully.
Kate Lineen led the full-voiced chorus as they added harmony and heart to the songs throughout the show.
The band played, as they always do, with great heart and expertise. The props were outstanding this year. Designed by a large team led by Ms Ann Ryan-Maher, their detail was incredible. The Greyhound Bus driven expertly by Saoirse Finn was a real feature. Set and stage construction was led by the legend that is Mr. Paddy Lonergan and it was even more extensive than usual. Paddy even managed to get a fully operational motorcycle on the stage.
With such a large cast, the job of fitting them all with appropriate attire, fell to Ms Cathriona Maher. And what a wonderful job she did. The statue costumes alone were worthy of any Broadway production.
There were many contributors to this epic production. They all played their part in putting together what was one of the Coláiste’s best to date. Can’t wait until next year. 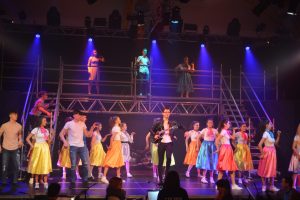