The day consisted of many different activities. First we tested different equipment such as a pooter, pitfall trap sweep net and more. We also found out about the story of the universe. Then we went onto variety of species where we chose five vertebrates and learnt how they adapt to their environment -eg. a pine martins tail helps them to balance. We were also shown stuffed animals which are shown in the photo below. Then we did a habitat map of the flower meadow as we looked towards the devils bit Mountain. We also used quadrats in this area. Some plants I found were doc, grass, dandelion and creeping buttercup. While doing this we found many small frogs. We lastly used a line transect in the reed bed and some common plants we came across where ivy, grass and clover.
Report by Amy O’Dwyer 3rd Year. 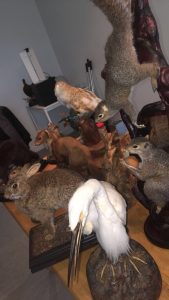 On Friday the 19th of October, our science class visited the Cabragh Wetlands in Thurles. There were three activities on the day.
Firstly, we investigated traps used to capture insects in a habitat and also we went on the “Cosmic Walk” where we were told the story of how we came to be, through rock and wood sculptures.
Secondly, we were shown a presentation on stuffed wildlife creatures such as rabbits, stoats, little egret etc. and were told many facts about the creatures. This part of the day interested me the most as I thought it was fascinating to come so close up to the animals.
Lastly, we went out onto the wetlands to use quadrats to study the number of plants in the field. We were told interesting stuff about the area like during bad rainfall, the whole wetland may be flooded with water and people can even canoe over the land. This part of the day was interrupted by the discovery of loads of frogs as you would rarely ever see any or come close to them.
Report by Bryan Cahill 3rd Year. 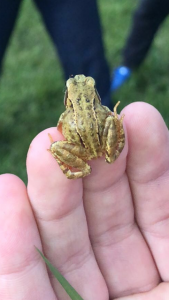